Almost every industry is heavily automated - from robots on car assembly lines to the self-service checkouts at every supermarket. And if you use accounting software at your company, chances are it automates tasks, too, such as filing CIS returns.

As worsening skills shortages within construction push the price of labour upwards, it’s inevitable that companies will increasingly look to machinery and technology to offset the need for labour and increase productivity. Robotics is one of the most exciting areas of construction technology. Let’s look at some potential (and current) applications.

Drones - Management and monitoring
Drones are small, remote controlled aircraft that have many applications across numerous industries. In construction, camera-carrying drones are already being used to check work progress, monitor deliveries to sites, and carry out site inspections. The operator doesn’t necessarily need to be present on-site to control the drone and monitor its footage.

Another application of drones in construction is providing ‘vision’ for unmanned machinery. The drone scouts out the vicinity of, say, an unmanned bulldozer, and the bulldozer’s computer uses this data to adjust or plot its course accordingly. Skycatch are an example of a company offering these types of drones.

In construction, 3D printing involves printing layers of a substance (usually concrete) on top of each other until a structure is formed. This technique means that it’s easier to build houses that have complex geometry, allowing for new and intriguing building designs. We expect more and more prefabs to be built in this way over the coming years, followed by an increase in on-site printing further down the line. 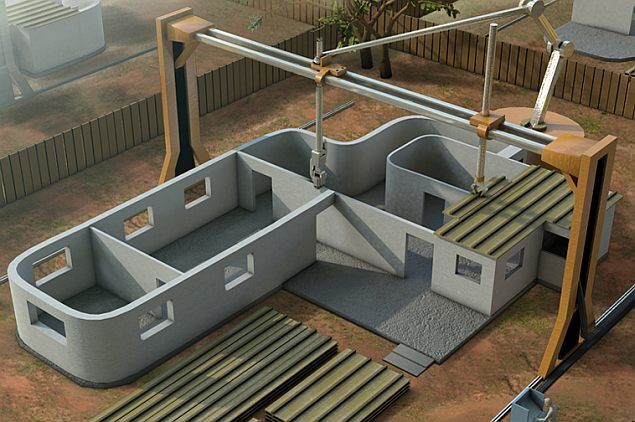 Bricklaying robots
Another threat to bricklayers comes in the form of bricklaying robots, which can far outstrip both the speed and precision of even the most experienced brickie. Some of these robots, like the SAM100 use normal bricks and mortar - but can lay them six times faster than humans, with no need to to take breaks for lunch.

Other robots such as the Hadrian X use larger bricks that are assembled using adhesive, rather than mortar, but can build much faster than robots using traditional materials.

What will the future hold?
These technologies may be impressive, but UK bricklayers and construction workers shouldn’t expect to lose work because of robots any time soon. There are still huge issues around the regulation of drones, not to mention how 3D printed buildings work with building regulations designed for conventional construction.

Site conditions will continue to be a problem. Of course, you can program robots to make adjustments based on whether or not the ground is wet and so on, but they’ll still struggle with extreme conditions or just lots of mud! Robots work best in standardised, predictable conditions - which most building sites can’t attain.

Finally, building projects are often ‘bespoke’, with many different materials used during their construction. If we used 3D printers and robots to build these bespoke projects, would we need a different robot to manage and use each material? That doesn’t seem terribly efficient.

We recommend that construction companies keep an open mind when it comes to robotics, but not to jump the gun - the technology is advancing so rapidly that early adopters could end up with inferior technology instead of the competitive advantage they’d envisioned.

Established technologies like construction management software are far more likely to give you a return on investment! If you’re looking to upgrade your accounting software, check out our seven step guide to switching.

Next up: Autumn Budget 2017: Talking points for construction

Long term client R Collard strengthen operations with asbestos management acquisition
We spent a day running through the reporting capabilities of Evolution M. The system easily catered for our day to day reporting requirements and without doubt added a new dimension to our weekly, management and job costing reporting.